The name Nefertiti translates into "the beautiful one arrives"

Queen Nefertiti ruled ancient Egypt alongside her husband Akhenaten from 1353 to 1336 B.C. She and her husband upended centuries of tradition by supplanting the classic polytheistic religion with one the worshipped a single deity, the sun god Aten. Additionally, she moved the governing capital from Thebes to modern day Amarna.

An interesting fact: Queen Nefertiti is thought to be the step-mother of King Tutankhamun.

The sculpted bust of Queen Nefertiti, believed to have been crafted in 1345 B.C. by the sculptor Thutmose, was discovered in 1912. It has become one of the most copied works from antiquity. 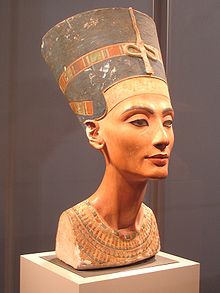